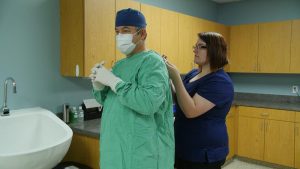 Elective Surgeries that are routinely performed in Cats

Cats are designed to produced a large number of kittens in a short period of time. A female will begin to cycle early in the year, usually somewhere during the months of January and February. Female cats may only complete their cycle by becoming pregnant, that is until a cat mates, they will remain in estrus or heat, repeating cycles every 21 days until pregnancy results. Cats will deliver their babies in about 60-65 days depending on breed. Between 2-6 weeks after delivery, they will again cycle, becoming pregnant again even while nursing kittens. Some cats will produce as many as four litters in a year, with the average litter being four kittens. Therefore, a cat may produce as many as 16 kittens or more each year. One can see how quickly they may be overrun with cats. A female may mate as early as eighteen weeks of age.

From the standpoint of cat population control, every cat needs to be spayed at a young age, generally around 4 months old. The “spay” is the surgical procedure in which the female reproductive tract is removed, to include removal of ovaries, ovarian tubes, and uterus, thus eliminating the estrus cycle completely.

Being responsible and reducing the number of homeless kittens
Cat neuters are a procedure performed in male cats that involves removing the testicles. Generally, the primary purpose is to prevent the birth of unwanted kittens.While this procedure may be performed on any age of cat, typically this surgery is performed on cats between 5 to 8 months of age.

There are a number of secondary benefits (mostly behavior in origin) that are reduced or eliminated by neutering.

Declawing in the cat is the surgical procedure which involves cutting the attachment of the retractable claws, in order to remove the claw. Cats are generally declawed because of the destruction they are doing to furniture, or because of a tendency to scratch household members. Declawing is an elective procedure that is not necessary in every cat.

Most veterinarians and cat caretakers view declawing of the cat as a safe and beneficial procedure. As with all surgery, pain management after surgery is important. There are groups that have asked the question ” Is declawing a humane procedure?” If you are not comfortable with this procedure, do not declaw your cat without discussing your concerns with us.

The claws of a cat may be managed without surgical removal. these are the options:

Softpaws are soft coverings that are glued over the nail. These coverings will require replacing every four to six weeks.

Nail trims are easily preformed with cat claw scissors or even with a small human nail clipper. You must exercise care not to cut the claw too short, causing pain by cutting the blood vessels and nerve in the claw. Nail trims are usually required every 7-10 days.

Scratching posts work well in many houses. The cat is trained to scratch at a post that has cardboard or cloth attached. The difficulty is your cat may prefer the fabric of your couch! Know also that cats which have used a scratching post for years may for some unexplained reason suddenly shred a piece of furniture.