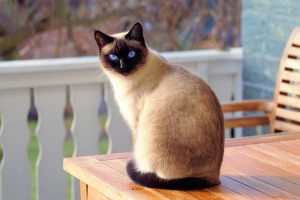 Siamese cats originate in the country of Siam, present day Thailand. They are one of oldest cat breeds, originating around the 14th century or earlier. In Siam, they were valued by the Royal family. They believed that when members of the Royal family died, their soul entered into these cats. Therefore the Siamese cats were treated like royalty, living in the Buddhist temples and being cared for by the monks and priests.

Siamese cats are very affectionate, and at times demanding of your attention. Some would say they can imitate a dog sometimes in their behavior toward their pet parents. These cats are also very talkative, to the point of distraction. They love to spend time with their human family talking and interacting with them. Many Siamese cats will fetch, run agility courses, and walk on a leash. They bond to household members by shadowing them around the house.

Since they are socially dependent creatures, and don’t like to be left alone for extended periods of time, one may consider adopting two. Remember how much fun the Siamese cats had together in the Disney film “Lady and the Tramp?” You will have more adventure and they will be happier together. Otherwise, one may talk to you all night trying to make up its lost words for the day and you’ll be short on sleep!