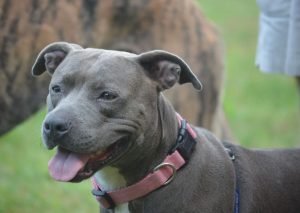 What is this all about?
Pit Bull Awareness Day began in 2007 as an effort to counteract the negative image that surrounds the American Pit Bull Terrier or the group of dogs known as “pit bulls.” Image and stereotype change were the focus. The desire was to create positive images for the pit bull dog group and to educate the public. At the time, there was a negative reaction to the breed including many municipalities actually banning the breed. The unfortunate result of bans caused more bull terriers ending in animal shelters.

What is the truth about Pit Bulls?
The truth is not always as clear as the coverage of pit bulls, either side, negative or positive, would have us believe. As a whole, most pit bulls are sweet and loving pets. Yet the most serious bite wound I received in handling dogs daily for over forty years was inflicted by a pit bull which required facial surgery. In spite of how sweet pit bulls are with their owners, the breed has instinct to fight other dogs. In multiple dog households, with one or more pit bulls, more dog fights and more serious damage occurs as they inflict wounds to other dogs. Often these dogs have lived in the same house for months to years before something sets off this fighting instinct. To add further pain and misery to this situation, once this aggressive reaction starts, it continues. The aggressive dog then must be removed from the household. The number one breed attacking other dogs at the dog park or other dog congregations is the pit bull. However, pit bulls remain very popular. They far exceed German Shepherds, Chows, Rottweilers, and other aggressive dog breeds. Yes, I have treated some of nicest pit bulls you could ever meet.

Should cities and communities consider a ban against pit bulls? Absolutely not! The responsibility lies with owners’ recognition of the propensity of instinct in the breed, and wise ownership in training to not do anything to encourage aggression.

What about pit bull owners?
The vast majority are responsible people and are generally some of the nicest people I know. However, as with any group of people there are some undesirable characters. There is still group of people that take pride in the aggressive nature of their dog. While they would not actively fight their dog, they embrace the macho image of owning an aggressive dog. These people often are the same people that adopt these dogs from shelters. Unfortunately, most shelters are more interested in the number of dogs they adopt, and not the quality of the home and environment. Fortunately, there are very credible rescue organizations which include vigorous screening and references before adoption.

Bottom Line
Negative media has a habit of sensationalizing and creating false stereotypes to this whole group of dogs. We must acknowledge there are aggressive tendencies with which owners have to deal responsibly. The public requires education about both the positive and negative traits to protect the pit bull from falling victim to the negative press. Veterinarians have the privilege and honor to care for many marvelous examples in this breed, so we will not condemn them, just respect them.