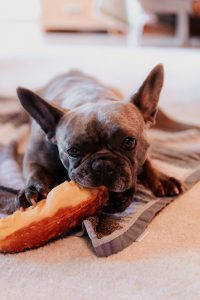 Pancreatitis is a common disease of dogs, especially in small breeds. Pancreatitis is the inflammation of the pancreatic gland near the stomach which has two functions.

There are many causes of pancreatitis with the most common being an inappropriate diet. Foods that are high in fat are commonly associated with the disease. Often the disease is chronic in nature beginning with occasional vomiting that requires minimal intervention. Often these dogs are identified as having a sensitive stomach” by the owner. As pancreatitis becomes more severe, vomiting episodes with or without diarrhea may develop that does require aggressive hospital intervention. Other cases will have little or no vomiting associated with the disease, but refuse to eat due to pain. Abdominal pain is a common sign of pancreatitis. In some cases, pancreatitis may cause death.

While severe pancreatitis may develop after a single exposure to offending substances, more commonly the insult is long-term or chronic in nature. This means it has been fed for an extended period of time without an apparent problem. Then, one day the pancreas says,” No more!” These offending items generally are high fat treats and table foods such as bacon and barbeque.

Pancreatitis is not an uncommon disease. However, as the holidays approach, there is always an increase in the disease as pets receive their holiday cheer. Inappropriate food items may make your pet very sick and put a damper on all holidays. Don’t let your desire to please your pet result in disaster.