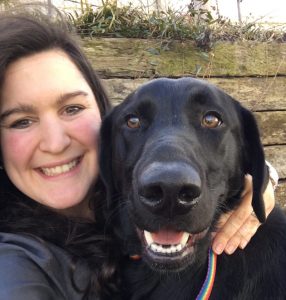 Mosquitoes!! I hate those nasty blood sucking pests! All I want to do in life is to be able to eat treats and lick everyone’s face. I’ll even knock people over to give them kisses. For real – just ask Dr. Stroud, my veterinarian. The first time I met her, she crouched down to meet me and told me to come here. What did I do? I ran over to give her a kiss and knocked her off balance so she fell right on her backside. My Mom was more than embarrassed, but Dr. Stroud didn’t seem to mind. She just started laughing, which I thought meant,“ Give me more kisses”, so I did. By the way-my name is Ollie and I am a heartworm survivor.

You don’t know about heartworms? Well, let me tell you, those things will kill you! Yes! Seriously, they can cause death. They’re not like the typical worms that live in our gut or the kind you use to catch fish. Giving us the over the counter de-wormers won’t kill them. Heartworms are a parasite which are carried and transmitted by mosquitoes. Now you see why they’re nasty? When an infected mosquito comes and bites, because we are more susceptible to heartworm disease, say than a cat, the mosquito can transmit baby larva into our blood stream. Not only do they cause the skin itchy spot as in people, but the babies grow over months to become adults. These worms are 12-15” long and live inside our hearts, all curled and tangled about like a big mass of spaghetti. Our hearts are pretty much their home base. They stay and just build a whole huge community in there. Over time, they clog our heart chambers, vessels, move into our lungs, and even sometimes up into our spinal column. One of my friends had one in his eye! All those worms in our heart make it work harder and eventually it starts failing as a pump. Maybe you aren’t worried about it until your doctor tells you that you’re headed that way! Terrifying!

Mom was very upset- like crying and blaming herself because she didn’t give me the preventive medicine. I tried to make her feel better with kisses, but she said it was her fault. She had taken me off my heartworm prevention during the winter because she thought it was too cold for mosquitoes. Dr. Stroud said there are a lot of people that think that way. However, in southwest Missouri the mosquito population is thick all the time but more in the summer. They’re out on warm days in the winter and can even live indoors in houseplants moisture and the little trays that go under the plants to catch extra water. So inside dogs are at risk too.

How about some good news? There is treatment!

When I was first diagnosed with heartworms, I was just coming in for my vaccine and six-month wellness exam. As part of my routine preventive care, Dr. Stroud ran a heartworm test on my blood, which tested positive for heartworms. After that, I had some other tests to figure out what stage my disease was. I was at stage 2, which meant that the gob of heartworms in my heart was increasing but not causing any blockage yet. I wasn’t currently showing any symptoms of heart disease, but I was headed that way if Mom didn’t decide to get treatment for me.

After talking with Mom, Dr. Stroud put me on some medicine that helped kill bacteria inside the heartworms that could cause a problem. Then I also got a few injections to kill the adult heartworms. The hardest part was that after the medicine injections, I had to be kept really calm for a few months while all the worms were being affected by the treatment. If I got too active, the dying heartworms could be moved by my heart beating faster. We didn’t want the worms to go anywhere they weren’t already. If that happened, they could go to the blood vessels in one of my lungs and cause a blockage there, which could have been life threatening. Mom made sure I obeyed the restrictions exactly.

After six long months, Dr. Stroud was able to give me the news we had been hoping for – I was heartworm free and I could go back to running, jumping, and knocking people over to give them kisses. Now, I never miss my monthly heartworm prevention, which tastes just like a treat. Don’t worry if you don’t like treats ( I think you might be crazy!) or if your Mom and Dad are forgetful. There is another medicine which comes as an injection, given by the veterinarian, that will protect from heartworms for SIX months. This is a really good option for pet parents which are busy. I take my prevention on the same day each month. Either way, I just wanted to get the message out! Heartworm prevention is vital for all pets because it saves our lives!