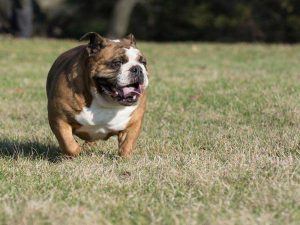 Lymphoma or lymphosarcoma is one of the most common cancers seen in the dog. Typically, these dogs will present with enlarged lymph nodes. There are usually multiple lymph nodes that are enlarged, but occasionally, only one lymph node is involved. In rare cases, there will not be any nodes enlarged, but instead, the liver, spleen, bone marrow, heart, or intestinal tract will be the source of this cancer.

Unfortunately, there have been limited options for the treatment of lymphoma in the dog. The most successful treatment has been to use four different drugs known as the Madison-Wisconsin Chop Protocol. Therapy was given weekly over a nineteen-week period with varying results which depended on the tumor stage. The goal was to provide a quality life for at least a year. A few cases survived for two years. Longer survival reports are rare.

Recently, a new drug, Tanovea, has been used to successfully treat lymphoma. Tanovea, which has full FDA approval, is a novel drug. It is the only one designed to target canine lymphoma cells. Eighty percent of the dogs treated with Tanovea for B-cell lymphoma will show improvement. The other nice thing about Tanovea is that therapy is given every three weeks for up to five treatments. This decreases the high potential of negative side effects as compared to weekly treatments. The most common side effects are gastro-intestinal disturbances that respond quickly to symptomatic treatment within about 48 hours. Tanovea is being used as initial treatment as well as a salvage treatment for those cases which relapse after treatment with a CHOP protocol. This is exciting news for those families that have fur babies which exhibit Lymphoma.