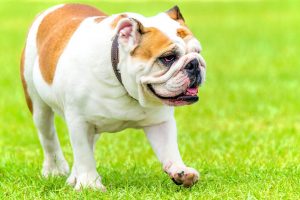 What is beauty? Ask someone who cares for an English bulldog and they have no hesitation to point to their bulldog. In fact, it is not uncommon for bulldog pet parents not to have simply one bulldog, but rather two or three.

This breed can be traced back to nearly 5th century England. Dogs in that time period were bred to do work. They originally were used on the farms to round cattle and horses. In the 15th century, they began to be used for sport of bull-baiting. These bulldogs were pitted against bulls in a fighting match that ended when they pulled the bull to the ground or the dog was killed. The original bulldogs were bred to be very aggressive and weighed about 80 pounds. These dogs could toss a bull weighing about 1600 pounds by corkscrewing around the neck of bull. You have to be amazed at that type of power!

Naturally as time passed, bull-baiting became illegal and the bulldog was down-sized by selective breeding to other smaller breed dogs or crossed with the Pug. In addition, the bulldog’s aggressive nature was eliminated. The modern bulldog weighs generally only 40-50 pounds, unless obese. They have a gentle nature, affectionate, with a good temperament. However, there are those which have a stubborn streak. They are smaller in weight than their ancestors, yet they are still capable of great power. They are loyal and brave when it comes to their human companions, especially children.

Today’s bulldogs fit well in our lives no matter where they live. They easily adapt to the environment. They are fairly low in energy so exercise maintenance is not a concern. They are happy sniffing around the yard or in the house taking a nap on the couch. However, while they are easy keepers from a home management standpoint, they may incur major financial expenses. They are prone to skin and ear problems which are further fueled by those beautiful skin wrinkles and small corkscrew ear canals.

Still, at the end of the day, many who gaze in their face, with those large eyes, will say “Bulldogs are beautiful!” 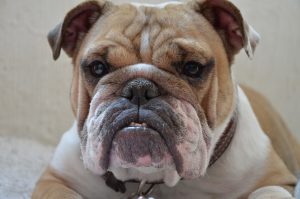