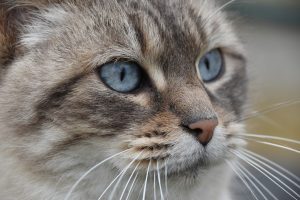 Mammary tumors are common in middle aged older female felines. They are rare in the male cat with risk factors less than one percent. Factors for females are influenced by whether or not she has had an ovarianhystectory (spay) and age the surgery was performed.

Clearly it is important to spay female cats early to reduce the risk for mammary tumors.

There are eight mammary glands divided into two chains of four per side. Tumors may be a single tumor but usually are presented as multiple tumors in multiple glands. Mammary tumors involve mammary tissue. Eighty-five percent of the mammary tumors are malignant. Of these, greater than eighty percent will metastasize to the regional lymph nodes, lungs, or pleural space (the area in the chest around outside the lungs and heart).

It is important to collect cells and verify in the office that the tumors are mammary tumors. It is possible for other types of tumors to develop in the mammary gland. Cells are collected by fine needle aspirate (collecting a small sample of cells with a needle) to verify it is a mammary tumor.

The tumors are staged by size and location.

In order to identify if the tumor has spread to lymph nodes are thoracic radiographs (x-rays) of chest and ultrasound of regional lymph nodes is necessary. In cats, because of the high degree of malignancy, a staged bilateral complete mastectomy (one side is removed then after healing the 2nd side is removed in 2-3 weeks) is performed depending on the size and location of the tumors.

In cases where multiple tumors are present or the tumor is greater than 3 cm, chemotherapy is added to try to prevent recurrence (rare) and to decrease the rate of development of new tumors. The addition of chemotherapy generally will increase survival time to more than a year.