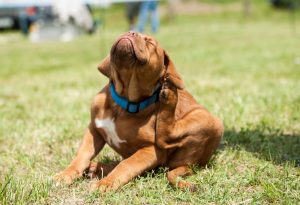 By far the most common reason for allergies is the flea, as well as other environmental sources. In people, the target organ (area most commonly affected) is the respiratory system. One can recognize this by what is commonly called hay fever. In the dog, the respiratory system is occasionally affected but it is not the most common target. A dog’s skin is the target and can be observed by an intense reaction which may become painful. They have familiar reactions – intense itching, biting, chewing, or licking at a particular area of the body. These manifestations may appear different, yet they all are caused by the pain associated with the allergy.

Skin is the largest organ in the body. There are different areas of the skin in which various allergies tend to appear. This is helpful to the clinician to identify the source of an allergy and to formulate a treatment plan. One must realize it is not absolute because multiple allergens can affect the body simultaneously. Symptoms of an allergy are similar and may overlap.

Environmental allergies (hay fever) result from allergens present in your pet’s environment. These include dust, fungi, pollen, mold, plants, grass, mildew, perfumes, cleaning products, and smoke. The most common causes are pollens from things such as Bermuda grass, ragweed, Oak and Elm trees. In other words, anything in the environment which may contact the skin, especially the feet. The list is long and exhausting. It is important to realize that plant pollen is often carried by vectors, miles away from where your dog will have a reaction. The important point is that environmental allergies do not have to be from a close source to cause a reaction.

Environmental allergies most commonly affect the feet. One observes them commonly as chewing, licking, or biting at the feet, especially one or both front feet. However, there are dogs that will chew, lick, or bite at the back feet instead, or all four feet. Many dogs will stop if corrected, but as soon as you leave, they are back at it. These feet are actually painful; this is an obsessive behavior and should not be ignored.

The second most common area to be affected is the ear. Infections of both ears, most commonly with yeast, nearly always point to an allergy. The ear canal becomes swollen and painful. Yeast will quickly invade the ear taking advantage of the opportunity. Less common signs include muzzle rubbing, the rubbing of the side of face alone on the floor or furniture. Sneezing, coughing, and runny eyes may occasionally be seen. 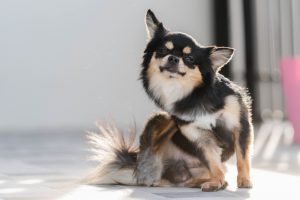 Treatments have changed dramatically through the years. Antihistamines have been used but with poor success. Histamine is not the major chemical released in the dog. Benadryl may be used safely in the dog at 1 mg per pound; it has no benefit other than sedating the dog and causing drowsiness. In a few cases, it can actually cause the dog to become hyperactive. It does not stop the reaction or relieve the pain.

Steroids, for years, were the only thing that gave dogs relief. Over years, steroids have all types of negative side effects. They cause the body to be more susceptible to infections as well as damage the liver and kidneys. They were the only treatment and today they may still be used judiciously.

Two new drugs are now available- Apoquel and Cytopoint. Apoquel works in the middle of the body’s chemical reaction to block it and the painful effect. It can relieve itch and inflammation, having relief starting within four hours. It generally is used for short term use during the institution of the second drug – a monoclonal antibody known as Cytopoint. In the dog, there are no side effects to Cytopoint. Given as an injection monthly, Cytopoint does a great job to put the fire out.

It is always important to use flea and tick control to prevent the instigation of an allergy. A pet parent who forgets to institute such control will quickly know of their error when Fluffy starts scratching and biting. It is our recommendation, in southwest Missouri, to maintain flea and tick control year-round, removing the need to remember to start and stop parasite control.

Click here to read Marley’s story about his suffering from allergies.