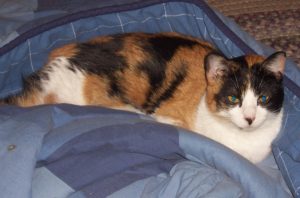 According to the American Heartworm Society recent studies indicate heartworm infection, once thought to be primarily a disease of dogs, is more common than previously believed in cats. A common myth that inside cats are safe is actually false since mosquitoes often are found inside the house. Typically cats develop a low number of heartworms which creates problems with diagnostic tests. However, this low number of heartworms may cause fatal implications in the cat due to the small size of the heart and vessels.

Signs of feline heartworm disease are vague and are often diagnosed as other common diseases. Signs of disease can include the loss of appetite, sluggishness, intermittent vomiting (not associated with eating), coughing, wheezing, and respiratory distress. Feline heartworms may be disagnosed as chronic respiratory disease, feline asthma and even inflammatory bowel disease. Often the only symptoms are sudden death, that is, coming home to an apparent healthy cat that has died for no known reason. This can occur in cats that have as few as one heartworm.

The American Heartworm Society and the staff at Cornerstone Animal Hospital recommends all cats are placed on heartworm preventive. As always, an ounce of prevention is worth a pound of cure.