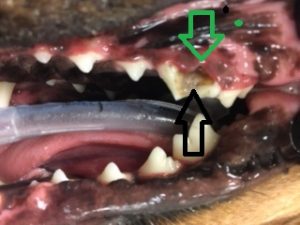 I am a 4 year old male Dachshund named Baron. I like being stoic and tough. I bit down on something hard and broke my large tooth ( upper premolar) on the left side of my jaw. I chose not to let anyone know, but I hurt all the time, and suffered in silence. I thought I had everything under control.

I had a six month physical exam at Cornerstone Animal Hospital. All was going well, my check up was not a big deal until the doctor looked in my mouth and say a broken tooth. My gum was red and easily bled when it was touched. There was no more hiding what I did to myself. 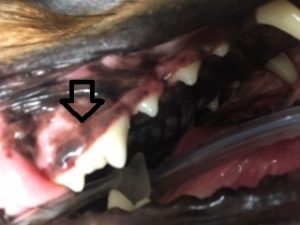 Quickly I was scheduled for surgery on that tooh. Apparently the tooth I had broken has three roots, so the surgery wasn’t going to be simple. Extraction of the tooth involved lifting the gum off the bone and then cutting the tooth into sections. Each section was then removed separately. The bony fragments were smoothed with a diamond bur and the gum was closed over the extraction site. The procedure was not painful, because when I heard surgery I had gotten very nervous. They used a nerve block during the procedure and oral medication after the procedure. Although I had to eat soft food the next few days, they went by quickly.

I feel so much better now! My mouth is healed, and I have decided that being a tough guy is not such a great plan after all. Now when I hurt, I let my Mom know about it.