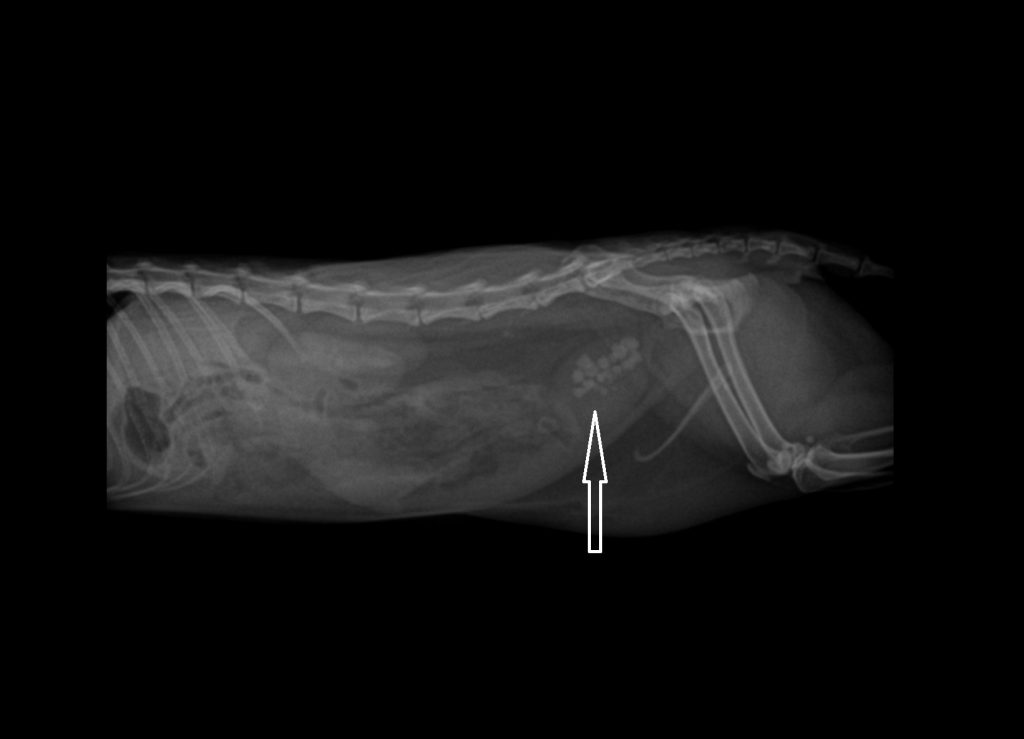 Radiograph showing stone in the bladder

It was a Saturday night, and I was in severe pain. I could not urinate. My master took me (her beloved ferret) to Cornerstone Animal Hospital to be seen as an emergency. On examination, it was determined that I had a bladder obstruction. A cystocentesis (drawing urine directly from my bladder with a syringed needle to provide pain relief) was done immediately so my bladder would not rupture. I felt better right away. Radiographs (x-rays) were taken of my bladder. I had stones in my bladder! I didn’t know how they got there, but I had tried to pass one of the smaller stones which caused an obstruction.

A cystotomy ( surgical removal of the bladder stones) was performed. The stones were flushed and retrieved from my bladder; the catheter was now removed. What a relief! I felt so much better within a day, then back to normal within a week.

Urinary obstruction is common in male ferrets. The usual cause of obstruction is generally prostatic cysts. Male ferrets develop large cysts on the prostate which impinge on the bladder outflow of urine. This causes straining when trying to urinate, incomplete emptying of the bladder, and pain. The cysts are caused by abnormal hormone production from a cancer of the adrenal glands.

Obstruction may also be caused by bladder stones. The most common clinical signs of a stone is hematuria (bloody urine) and dysuria (straining to urinate). The blood is caused by the stone rubbing against the bladder wall and damaging the tissue. Dysuria (straining to urinate) is caused by swelling and inflammation in the wall which leads to muscle spasms. The stone also may actually be blocking the bladder outflow path causing obstruction. Stone production and physiology is not in the scope of this article.