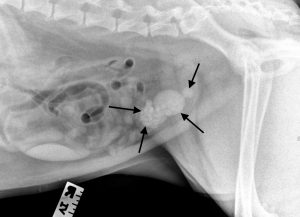 Hi there! My name is Sophie and I am a three-year-old female Golden Retriever Mix. It’s that time of year again when I get taken to the doctor to they can make sure I’m healthy and to get my vaccinations updated. This time, they had some concerns. I was trying to hide it, but Mom and Dad ratted on me. They told the doctor that for the last several weeks I have been needing to urinate more frequently and that my urine looked it bit darker. There were even times when I seemed to strain to urinate and I only produced a couple of drops. I needed to go so bad that I was even having accidents in the house. How embarrassing!

A urine sample was analyzed and they said I had signs consistent with a urinary tract infection, which is a common problem in female dogs that are overweight. Oops – that’s me! The doctor placed me on some antibiotics and told my parents that she wanted to see me in a week. By that time, I definitely was feeling better and was no longer straining, but I still needed to urinate more frequently than I had previously done. The doctor said that was uncommon with a simple urinary tract infection and ordered some radiographs.

The results were shocking. While we initially thought I had a simple urinary tract infection, it looks like I had built up a large number of urinary stones (black arrows). The doctor explained that when bacteria cause an infection in the bladder, they can quickly change the pH (acidity) of the urine and the body produces stones in response. It actually only takes five to seven days for this to occur. The doctor was suspicious that is what started all of this initially since it was now a few weeks of trouble.

My antibiotics were refilled as the stones could be a continual source of re-infection and I was scheduled for a cystotomy (an abdominal surgery which exposes the bladder so stones can be removed). Analysis of the stones post-surgically confirmed the doctors’ suspicion that these stones had developed because of the initial bacterial infection. Now Mom and Dad know that if I start urinating more frequently, straining, or have discolored urine in any way that they need to get me to the doctor ASAP and not wait a few weeks. While I wouldn’t wish bladder stones on anybody, I’m glad I can tell my story. I am so happy to be pain-free now and not feel that urge continually to go to the bathroom. Plus, I am feeling better more than ever now that I am working on losing weight which set me up for the urinary tract infection in the first place.