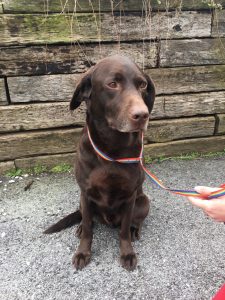 Bailey! Bailey! Come on in- time to eat! So that is what my Mom called to me one day last summer. As a six year old male Laborador Retriever, I live to eat. However, today I started to feel blah. As the day progressed I felt worse and worse. In the evening I was simply miserable, and I would only lay around. I didn’t care about anything including food. That definitely was not me!

The next thing I knew I was on my way to see my friends at Cornerstone Animal Hospital. At my examination, I recorded a fever of 104.6 ( my normal is 100) and showed signs of dehydration. No surprise! I had not been drinking anything all day and the fever was consuming my fluids.

I was placed on IV fluids while additional diagnostic blood work was performed. My platelet count was low at 85,000 ( normal is greater 200,000). What are platelets? They are part of my clotting system, and required as the foundational structure for every scab. In fact, numbers below 100,000 may lead to spontaneous bleeding. This often is seen as unexplained nose bleeds, bruising, or even internal bleeding. Fortunately, I did not show any evidence of developing bleeding issues.

Low platelets might also be caused by a number of different problems but the most common in southwest Missouri was a disease transmitted by ticks called Ehrlichiosis. I was immediately tested for diseases spread by ticks. I tested positive for Ehrlichia, a red blood cell parasite.

Over the next few days medication was given to eliminate Ehrlichia from my system. I also received fluids and pain medication to manage my fever. Ten days later (it felt like a very long time) I was totally normal and my platelet count had return to 250,000. I was well at last! It was amazing that a single tick bite I received could cause such illness.