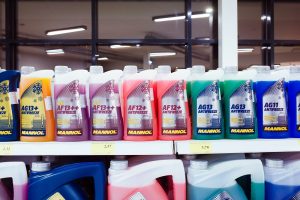 As cars are prepped for winter, antifreeze is easily spilled and left to evaporate. This practice leads to an increase in antifreeze toxicity in house pets. It is estimated that 90,000 dogs a year will suffer from antifreeze poisoning. Ethylene glycol is a highly toxic component that has a sweet taste that pets readily consume. Antifreeze spills, although it appears small, maybe enough to cause irreversible kidney damage to your pet and death. A cat only has to lick one teaspoon off the floor to result in kidney failure and death. The amount required to kill a dog depends on the weight of the dog, but five tablespoons are all it takes for a medium-sized dog.

The signs of antifreeze poisoning will develop quickly within thirty minutes to twelve hours. Initially, pets may be wobbly, walking as if drunk. Other signs are nausea, drooling, vomiting, excessive thirst, urination, diarrhea, and even seizures. Often in 12-24 hours, the pets appear to be improving and returning to normal. Unfortunately, this is not the case. In another day or two, dogs will develop acute kidney failure. In the cat, kidney failure occurs within twelve to twenty-four hours.

Antifreeze is best treated as soon as possible after ingestion. Once kidney failure develops, the chance of a positive outcome is greatly decreased. If antifreeze ingestion is suspected, rapid intervention and treatment are necessary.

Other products that may contain the toxic agent ethylene glycol are windshield de-icing agents, motor oil, hydraulic brake fluid, some paints, and some solvents. Many manufacturers are aware of antifreeze toxicity and are now adding bitter-tasting compounds to discourage ingestion by pets.
Antifreeze containing propylene glycol is available and safer for a pet owner.

Prevention of antifreeze exposure is best. Any antifreeze spill should be completely cleaned up immediately. All antifreeze containers should be tightly sealed and stored safely. Remember dogs are chewers and can chew into containers of antifreeze. Often outside pets are allowed in the garage during the cold winter days. Potential exposure to improperly stored antifreeze or a vehicle with a radiator leak could be devastating. Be sure to examine the area for the safety of your pet.