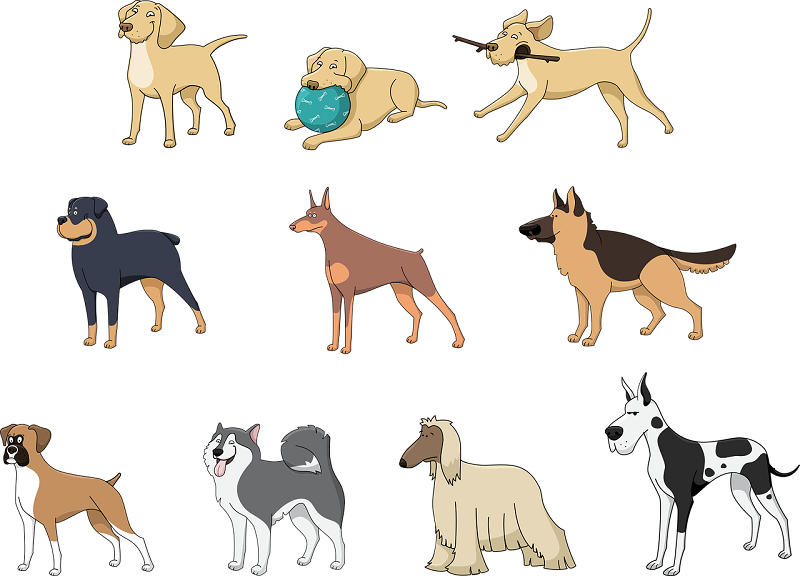 With hundreds of different dog breeds worldwide, there is an astounding amount of variation in size, shape, and temperament.

The American Kennel Club first divided dog breeds into various groupings in 1923 when the official rules of showing dogs in the competition were changed. There were at one point only five groups, which grew to reach seven in the following years, and it has remained at seven. The American Kennel Club recognizes 178 dog breeds and separates them into seven main groups. These groups are the Herding Group, the Hound Group, the Non-Sporting Group, the Sporting Group, the Terrier Group, the Toy Group, and the Working Group. The AKC also acknowledges a Miscellaneous Class, consisting of distinct dog breeds not yet recognized by the organization as members of any of the seven main groups. The different groups of dogs are as follows:

The Herding Group was established in 1983 when it broke off from the large Working Group. Not surprisingly, dogs in the Herding Group all display herding behavior and make excellent companions and pets for anyone who has a lot of time and energy. They also assist farmers in herding and are highly intelligent. Some examples of the more popular herding dogs are the Border Collie and the German Shepherd.

Most of the dogs in the Hound Group have been (or have ancestors who have been) used as hunting dogs and have incredible senses of smell, which is why they are often referred to as the scent hounds. They make great pets, not just for hunters but also for more normal, calm families and people. Some popular varieties of hound dogs include the Dachshund, the Greyhound, and the Whippet.

These dogs have very little in common and make great companions for many different kinds of people. They are less historically tied to sporting activities.

The Sporting Group was one of the five original groups established by the American Kennel Club in 1923. It originally included hound breeds, and like hound dogs, sporting dogs were once used in hunting. Some breeds are still used in hunting today, but many of them have become popular family pets. These pups are highly intelligent and are commonly used as service animals for disabled people. The Golden Retriever, Labrador Retriever, and Cocker Spaniel are examples of popular breeds in the Sporting Group.

These animals are named after their proclivity to dig in the dirt, and the word terrier comes from the Latin word for “earth.” This group includes dogs that range in size from fairly small to fairly large and originally, these dogs were bred to hunt foxes, large rodents, and other burrowing animals.

The Toy Group includes small dogs that were bred to be lap dogs. The most obvious trait these breeds have in common is their diminutive size, but many of them are also known for their generally happy nature and distinctive facial expressions.

The Working Group was one of the original groups as well, and herding breeds were included in this group until 1983. Working dogs were bred to perform a variety of tasks from pulling sleds, to performing rescue missions, to guarding livestock. Siberian Huskies, Saint Bernards, and Rottweilers are all popular breeds in the Working Group.

The Miscellaneous Class includes dog breeds that are currently part of the American Kennel Club’s Foundation Stock Service but have not yet been officially recognized by the organization or placed in a breed group. Therefore, the breeds in this group do not have anything in common in terms of size, shape, or personality.

Now that you know more about what the different groups of dogs are, what kind do you have? Or what kind do you think would best suit your needs? For more information please contact Cornerstone Animal Hospital today!